Setting Up an Ubuntu 22.04 workstation for Software Development and Content Creation

Ubuntu 22.04 a.k.a. Jammy Jellyfish is the latest LTS (long-term support) Ubuntu release, which means it will continue being actively updated and supported until the next LTS release in two years.

This release brings some exciting improvements, such as the new screenshot tool and custom theme accents. Upgrading is also important to make sure you are getting the most up-to-date packages and applications for your system.

In this step-by-step practical guide I will share how I set up my Ubuntu 22.04 workstation for software development and content creation.

If you need help installing Ubuntu 22.04 on your machine, check out this step by step guide on how to make a fresh Ubuntu install with full disk encryption.

To keep things organized, I like to create a directory in my home folder to store AppImage applications. We'll download some of them later.

Make sure you have your SSH keys set up. If you don't have backup keys to restore, follow this GitHub guide on how to create and set up a new SSH key.

If you're restoring existing SSH keys, you can follow the next section.

Restoring SSH keys (if your keys are backed up)

If you haven't done it yet, copy the SSH keypair you have registered with your code host of choice to a .ssh folder in your home directory. If you have your keys in a removable storage, you should make sure to copy them over and set correct permissions, otherwise they won't work and you won't be able to push code to GitHub / GitLab / etc.

The following command is an example of how to copy a .ssh folder from a removable media device into your home dir:

Then, change the permissions of the SSH directory and key files:

Finally, add the key to the SSH agent:

Power up your CLI: Terminator + Oh My ZSH

To keep going with your setup on a much nicer terminal, you will now install Terminator and Oh My Zsh. Terminator is a terminal emulator that allows you to arrange multiple terminals in a grid-like structure. Oh My Zsh is a layer of configurations on top of zsh that makes your terminal look super cool, with several themes and plugins to improve your productivity.

Start by installing Terminator and Zsh:

Next, install Oh my Zsh:

When prompted, confirm that you want to set Zsh as your default shell. This will require you to provide your sudo password.

In order to use some of the best themes, you'll need to first install Powerline fonts on your system. I prefer to run the install script directly from their official repository like so:

Next, it's time to configure Oh my Zsh. Open .zshrc and look for the ZSH_THEME variable:

There are several themes, but my favorite is agnoster:

After changing ZSH_THEME to your theme of choice, save the file and exit.

With nano, you can save and exit by typing CTRL+X than confirming with y and ENTER.

Next, we'll set up Terminator. This is how it should look now when you open it (type Windows then search for terminator to find it in your system): 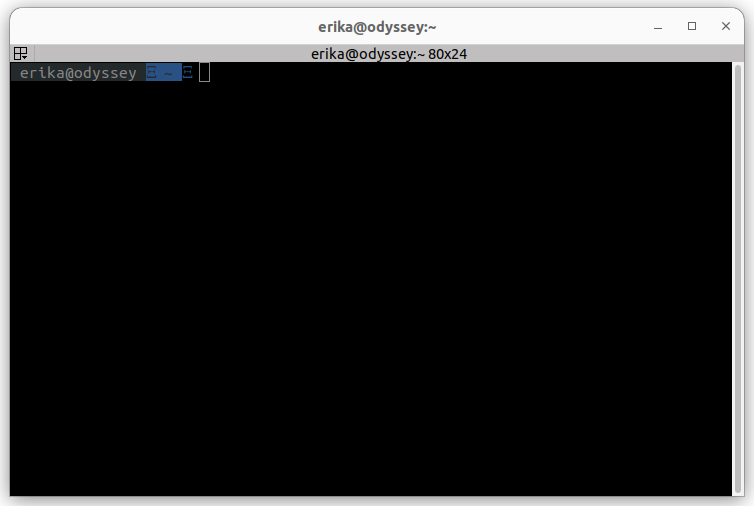 You'll notice that the prompt is already changed to use Oh My Zsh, but it is broken. This is because we still need to configure the terminal program (in this case, Terminator) to use a proper Powerline font, a requirement for using the agnoster theme. This brings icons and other niceties to the terminal.

Right-click and access the menu Preferences, then go to the Profiles tab and select the default profile on the left sidebar. Uncheck the option Use system fixed font. To disable that red top title bar, uncheck "Show titlebar".

Change the font to any of the Powerline fonts (you can search for "mono powerline" to facilitate choosing your favorite). I chose Noto mono for powerline bold, size 16.

Still on the Terminator profile preferences, I set the background to "Transparent background" at 80% and the Color scheme to "Solarized". Here's the final result: 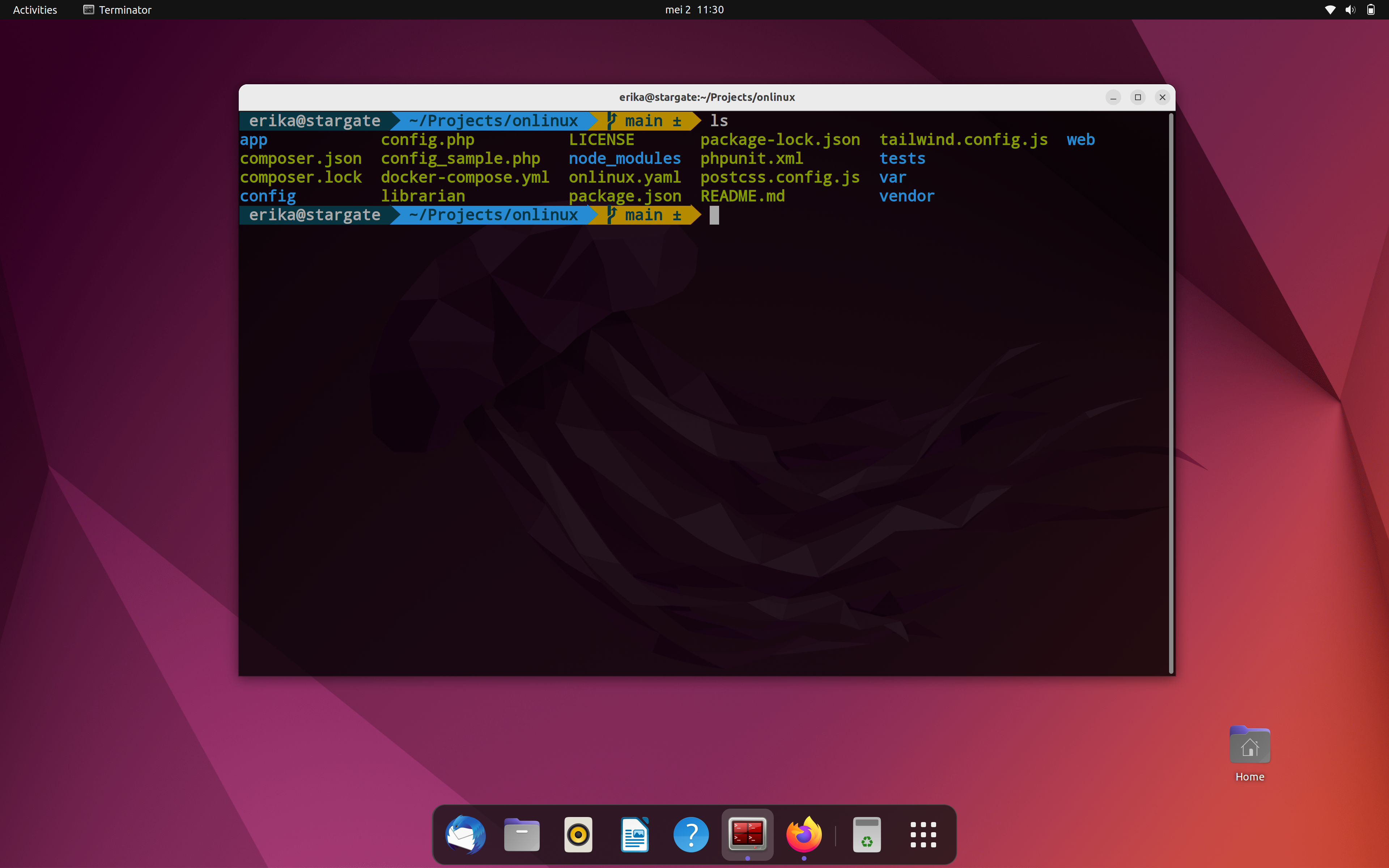 Git should already be installed on your system. To confirm, type git --version on your terminal, and you should see something like this:

If for some reason you don't have Git installed, you can do so with the following command:

With everything set, you should now configure your username and email within Git:

Development environments and other configurations related to software development.

I typically have PHP-cli on my systems because it's just a lot easier to run small scripts directly with it. Anything that requires extra dependencies runs on Docker. I also find it useful to have Composer to facilitate bootstrapping new projects with composer create-project. Usually after the initial project bootstrap I migrate to using Docker.

For Composer, you should follow the official instructions since the hash checking portion of the installation script will change often.

Next, install the Docker Engine and Docker Compose. The following commands are based on the official instructions from the Docker documentation.

You can check that it was successfully installed with:

Don't forget to add your user to the docker group so that you can run Docker without sudo.

Next, it's time to install your IDE of choice. This is more personal and depends a lot on which programming language you work with, what you are studying, etc.

Generally speaking, VSCode is an excellent choice for all languages, but if you are willing to invest in a paid IDE you will be very happy with any flavor of JetBrains.

VSCode offers a .deb file for Ubuntu/Debian users and that is my preferred way to install it. Once you download the file from the VSCode downloads page, you can install it with:

Replace the name of the file with the version you downloaded. After installation, you can type window and search for "vscode" to find it in your system. 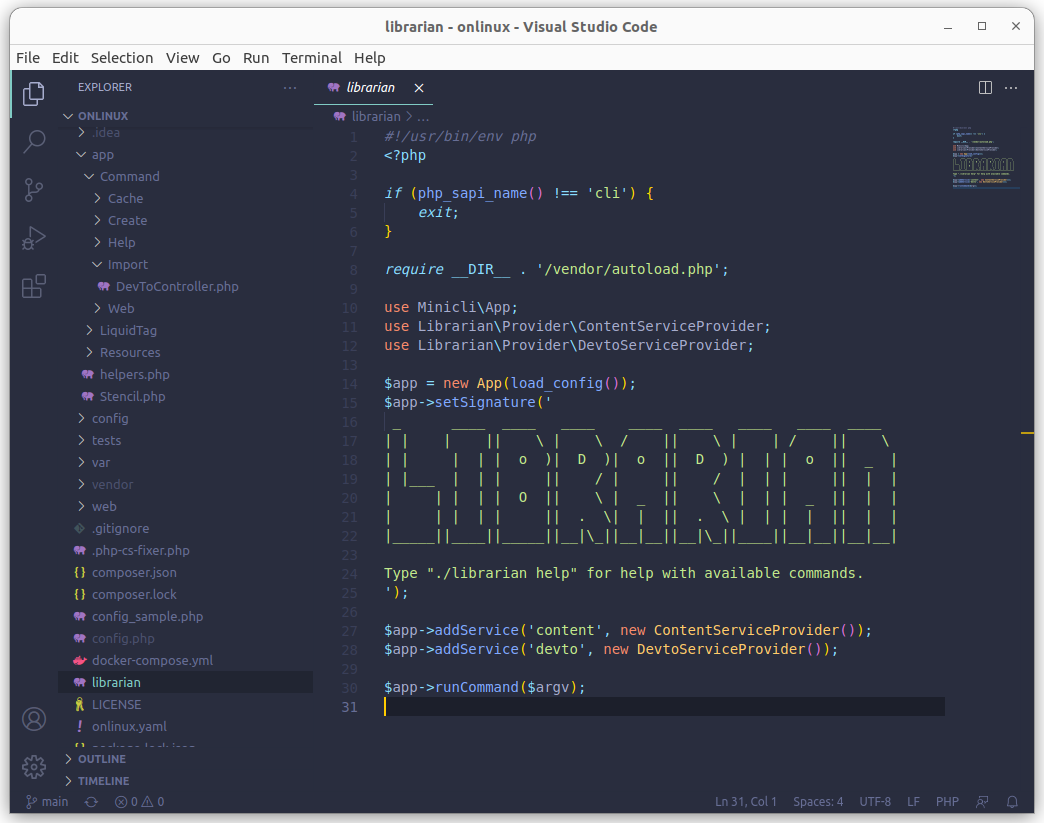 PHPStorm, as well as other editors from JetBrains, is offered as AppImage. I do not use Snap, so that's my method of choice for installing it on my system.

Once you download the appropriate package from the PHPStorm download page, you should unpack it somewhere in your home folder (I'm using ~/Apps for AppImages).

Then, run the executable script on bin/phpstorm.sh:

You'll be greeted by a configuration wizard, and you will be asked to choose between activating an existing account or starting a 30-day trial.

Once you get to the main window, go to Tools -> Create command line launcher to create a PHPStorm executable on /usr/bin/phpstorm. This executable allows you to open files on PHPStorm directly from your CLI, and also to access PHPStorm from shortcuts on Ubuntu. 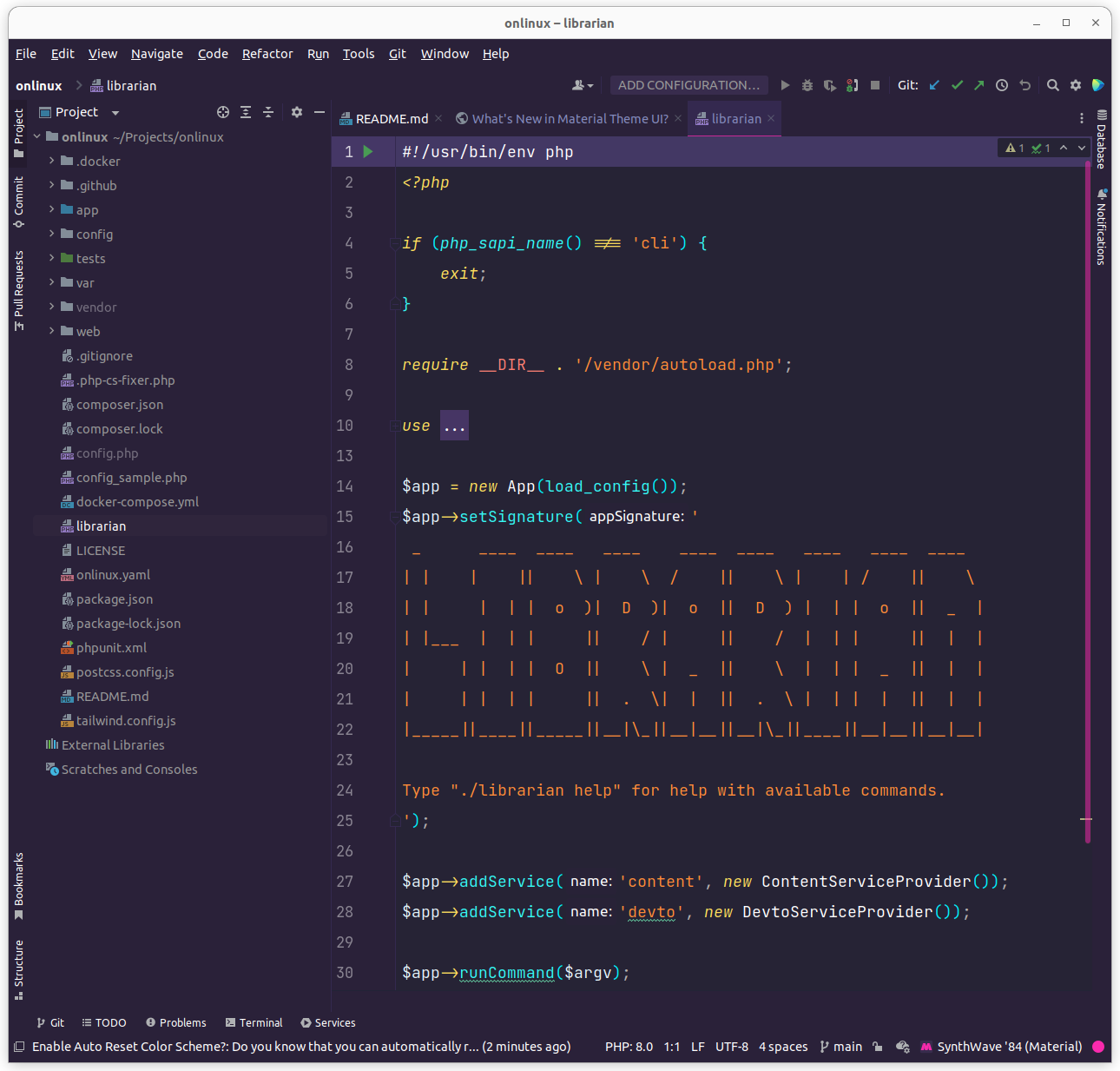 I big part of my work is to create content, using different media and content types. I will list here the software I like to have installed for dealing with image editing, illustration, video editing, audio editing, video and audio capture, live streaming...

I won't cover these in detail, but the installation method won't vary from the 3 methods we've already seen in this guide (apt, downloaded .deb with dpkg, or downloaded AppImage).

How to install and set up Ubuntu 22.04 as main system on a desktop computer

How to Edit Videos with OpenShot on Ubuntu Linux

In this guide you'll learn how to use OpenShot to edit videos on Linux Ubuntu (21.10)

This project is intended to document experiences with different kinds of hardware, gadgets, and software on Linux.

OnLinux by Erika Heidi is licensed under CC BY 4.0

Built by Erika Heidi with Librarian. Back to top

Found an issue? Have suggestions? Join our discussions group on GitHub.